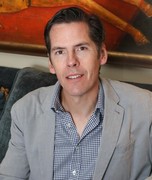 Business Editor at Deadline
Dade Hayes​ has specialized in entertainment business coverage for the better part of two decades as a writer and editor at Deadline, Variety and Entertainment Weekly. At Deadline, he writes about a range of financial and corporate news along with streaming, film, television, technology and advertising. In addition to BINGE TIMES, his account of the unprecedented boom in streaming written with Dawn Chmielewski, Hayes has written two previous books. OPEN WIDE, a trip inside Hollywood's opening-weekend box office ritual, was hailed by The Atlantic as "a classic, the best of the genre." ANYTIME PLAYDATE, an exploration of entertainment aimed at babies and toddlers, was called "illuminating" by the New Yorker.
Dade's writing has appeared in the New York Times, Los Angeles Times and Canada's Globe & Mail. He has also contributed original scripts to Wondery's Business Wars, a narrative podcast that has been downloaded tens of millions of times, and has appeared regluarly on media outlets like American Public Media's Marketplace, the BBC and CNN.