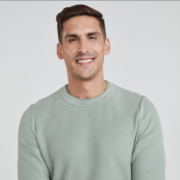 Cody Rigsby is a one-of-a-kind talent and rising star, taking the world by storm. Cody has become one of the most beloved and esteemed fitness instructors, captivating the attention of millions with his inspirational routines and humorous opinions through connected fitness platform Peloton.

Born in California and raised in North Carolina, Cody came to New York after college and worked as a professional dancer with chart-topping artists such as Katy Perry and Nicki Minaj, appearing in projects for Victoria's Secret, ELLE Magazine, Saturday Night Live and more.

As an instructor at Peloton, Cody reminds everyone in his classes to push themselves, but have a good time doing it, because we all need to have a little more fun. Cody believes that life should be experienced authentically, and this is fully represented throughout his rides. His Peloton #BooCrew has over 120,000 devoted members pedaling to Cody’s every word. A #BooCrew favorite, Cody also hosts unique “XOXO” classes, in which Peloton riders submit questions about life, relationships, pop culture, etc. for Cody to advise on and share his canid opinions during his live rides.

In Fall 2021, Cody was announced as part of the star-studded cast of the landmark 30th season of ABC's Dancing with the Stars. Cody proved a force to be reckoned with, making it to the finale and finishing the show in an impressive third place as a fan favorite.

Cody has also been the face of major brands such as Adidas, Capital One, Chobani, Therabody, Chipotle and more. Throughout his career, Cody has built an incredibly influential and moving platform, with his social footprint boasting over 1.5M followers on socials and another 5M Peloton fans.