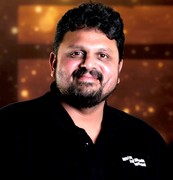 He has been instrumental in the strengthening of Film & Creative Arts education in India and the evangelising of multiple emerging technologies both into education & into the Film, Media & Entertainment industry at large.

Having acquired a strong understanding of the M&E industry and its education, both in India & globally, he has written several papers & articles about the same & is an active speaker & presenter at key global Media & Entertainment, Technology & Education forums.