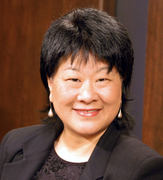 Janice S. Gin is the News Director at KITV, the ABC affiliate in Honolulu, Hawaii. Prior to moving to paradise, Gin worked in San Francisco at KRON, KTVU and KGO in various news management positions.  Gin has also worked in several markets across the country including Sacramento, Greensboro, Atlanta, and Phoenix.  Gin is an award-winning journalist who has won several NorCal EMMY and NorCal RTNDA awards for newscasts and breaking news.  Her work has also garnered  several Murrow and Peabody Awards for excellence in journalism.  Gin works a lot with young journalists, scholarship programs and has been an invited instructor and trainer at local universities, industry programs, and The Poynter Institute.

Gin has served on the national board of the Radio Television Digital News Association and also as a Trustee of its Foundation.  She has been an advocate and industry advisor in the fight for the First Amendment, Reporter Rights and Journalistic Ethics.