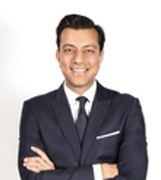 Sean Gupta is the SVP of Streaming Strategy for the Paramount Global (aka ViacomCBS) Streaming Organization that incudes Paramount+ and PlutoTV.  He is also an Adjunct Professor at Columbia Business School teaching “The Business of Television & Streaming.”

Prior to Paramount+, Sean was the SVP of Strategy & Business Operations at ViacomCBS’s owned BET Networks and a Board of Director of BET+ (BET’s OTT streaming service). He led network-wide strategy, business development and expansion initiatives for the network and in 2021 also co-led the operations of BET’s digital division.

Sean co-led the executive team that conceived of, planned and launched the BET+ premium streaming service, which went live in September of 2019. He was also a member of the deal team that negotiated and structured the SVOD JV with Tyler Perry Studios.

Before BET, Gupta held executive positions at Time Warner Cable and was an investment banker at Deutsche Bank on Wall Street for 6.5 years.

Sean is an Emmy voter, was featured in a 2018 HBS case study, a BOD member of T-Howard, and a co-founder of Socks-For-Shelters.  In 2020, Gupta was recognized by the industry publication, CableFax, as one of the Most Influential Multi-Ethnic Media Executives.  He lives in NYC and holds a BA from The University of Chicago and an MBA from Columbia Business School.