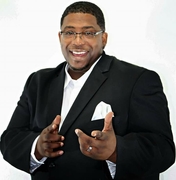 Radio Personality, Marlon “DJ THUMP” Rice is known throughout Las Vegas as “The Turntable Assassin” because of his incredible DJ’ing skills.

Originally from Los Angeles, California, “DJ THUMP” was fortunate to first land a gig at one the hottest radio stations in the nation, 92.3 The Beat. With such an awesome career start
in radio as a winning personality, “DJ THUMP” was able to move to another entertainment capital of the world Las Vegas, Nevada to hit the airwaves as the Afternoon Drive talent on Jwaomrmkiing’ a1t05.7. While at Jammin’, “DJ THUMP” became one of the leading radio personalities in Las Vegas. In February of 2022, he took over the coveted Morning Drive slot previously occupied by Steve Harvey to help reach the local, Las Vegas audience the same way he did in afternoon drive.

“DJ THUMP” has entertained and MC’ed at many events in the entertainment industry as well as the hundreds of Las Vegas community events. With his finesse and drive, he has obtained movie roles and numerous public speaking contracts for special events, concerts andcorporate functions.

“DJ THUMP” enjoys seeking out positive opportunities to spread words of encouragement to the youth. He represents as a member of PHI BETA SIGMA Fraternity Inc. and volunteers his services throughout the city and local community. He stands by his saying, “People don’t care how much you know until they know how much you care.”

Las Vegas now listens to “DJ THUMP” waking up Las Vegas every weekday from 5am to 10am.